This will soon turn into the Nightmare Before (or rather After) Christmas Competition! I've still had very little time to type up these stories. Apologies to those who've been waiting. Here are the winners of the B2 level. And my only entrant at A2 level. Enjoy!

(If some of these have the same beginning it's because they were written from a prompt in their exam book.)

I was feeling bored and was looking out of the window onto the street when I saw something strange. It was a shadow and then disappeared. I was scared and I was closed the window. I went down to tell my mom and my brother but they wasn't there. I called tomum and I said "Mom where are you? I'm scared because I saw a shadow and suddenly it disappered" My mum said" Izabela lock all the doors. The police are chasing a crazy man who kills little girls who are alone in the house." I locked all the doors and called the police. I remembered I jhad forgotten to lock the back door. I ran to the back door but I found the door open. I was scared so much. I locked the door and I ran to my room and I locked the door. I was hiding under my bed. Then I heard the voice of a crazy man. He said "Oh little girl I know where you are and I found you I will kill you!" He tried to unlock the door. I was beginning to cry. Suddenly the door opened and the crazy man entered my room. He stood in front of my bed and ducked. He pulled me out from under the bed and then he was pushing me. He tried to kill me with a knife in my leg. He injured my hand. He tried to slaughter me. It would have happened but the police entered my room and they saved me. When I found my mom I began to cry again because I was very scared. Anyway, everything went well. The police caught the crazy man and we moved house. I'm better now but really I'll never forget that day.

I was feeling bored and was looking out of the window onto the street when I saw something strange,there was a team  of people which was very different. Many of them had big nails, many fur around their face amnd also had wrinkles. They looked like werewolves. I decided to go out and see what had happened. I went outside my house and I saw around until I had found them. Suddeny I hear a loud noise it was a big monster he was coming towards me. I screamed very loudly and I was very afraid But I felt a hand pull me back and I hurtmy hand. Moreover the strange people that I had seen before fought the big monster. One, a boy, was coming to me and helped me to hide. He asked me" Are you okay?" and I said "Yes I am but I feel very tired." AlsoI asked hime Also I aske dhim "What are you?" he looked at me strangely and said " What do you mean?" I replied " You dn't look like people What are you?" He told me "Relax, we are only people." I was angry and asked him one more time" What are you? And be careful, this time telll me the truth." "Okay. We are werewolves" I was shocked and I told him "No I don't believe you! tell me now the truth." He told me  " This is th truth if you want to believe it, or you can believe whatever you want." After that I didn't say anything and I didn't look at him ether. When the fight was over, all of them came and the captain asked "What is your name?" I answered "My name is Maria." He told me "What did you see." I said "Do you want the truth?" He said "Of course" I said "Everything." He begged me not to tell anyhting about them and I promised I would. After day I saw all of them in school but they weren't werewolves and also I saw the boy who helped me and saved my life.

Last year a boy went to a party. He was all alone, but after a few time he met a girl and she was beautiful. He fell in love with her. After a few days they became a couple and the boy wanted to to marry the girl. "Would you marry me?" he asked the girl."Of course, sweetheart." she answered.
They were very happy for that decision. But one night when they were sleeping, the boy heard a horrible sound like an animal wich was breating very loud. He went to the kitchen to see where the sound came from but he didn't see anything. Then he went to his bed again. Suddenly, he realised that the sound came from the girl. He went closer to her but she didn't woke up. This continued for many weeks and the booy didn't have any problem any more with the sound.

Two days before the wedding he had a nightmare. He saw a lot  of people injured and most of them were dead. Then in his dream appeared a woman. "Don't marry this girl if you want to stay alive." she said to him. "Why?" he asked. "Just don't do that. Wake up and run and don't look back. Leave this girl behind you and run." she said to him. Suddenly the boy woke up and saw the girl was watching him. "You are going to leave then?" the girl asked him. "No baby," he asnwered and they fell asleep again.
The next day the boy thought about the words from the woman in his dream and at midnight he decided to leave the house house and the girlfriend who was sleeping. He took his clothes and some important things and started to run away. In the morning, when the girl woke up, she realized that the boy had left her. She went to find another boy to fall in love with her so that she could drink his blood to live. The boy was so happy that he was safe and he never fell in love with a girl again.


The Cursed Knight
By Nick Sargiotis

Once upon a time there was a good knight who cared for his people. A night when our hero was looking at the stars a witch cursed him to be bad every night with a blood moon. One night with a blood moon the knight almost destroyed an entire castle he lived in. Gladly they put him into the dungeon before he could destroy it.
After centuries some students wanted to go to the scariest place that ever existed. They chose a haunted house, but it wasn'r scary enough for them. The next night they went to an abandoned mineshaft which was abandoned 34 years. But it was nothing compared to what they wanted. Next night they searched on the internet for the spookiest place on earth and they found a ruined castle which was destroyed by a cursed night. On the internet said that every night with a blood moon the knight comes from the dead to kill people who tresspass his territory which was his castle.The students thought it would be the spookiest place on earth and they waited for a night with a blood moon. The next night - with a blood moon - the students went into the ruined castle to feel the spookiest experience they have ever experienced but one thing they didn't know was that the curse was real and their life would be in huge danger. The knight almost killed them but the soul of the king heard the students and defeated the knight. After that the students never wanted to go back again. 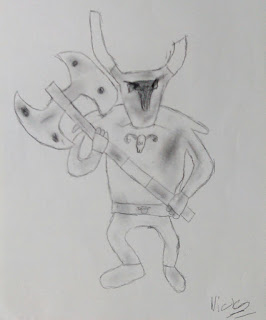